×
It looks like you're using an obsolete version of internet explorer. Internet explorer is no longer supported by Microsoft since the end of 2015. We invite you to use a newer browser such as Firefox, Google Chrome or Microsoft Edge.

Extending the boundaries: evidence for TAVI in low risk patients

Continuous development has improved the results of transcatheter aortic valve implantation (TAVI). Initially a niche for critically illed patients, this technique has been considered to be the preferred treatment for severe aortic stenosis in high surgical risk patients. Recent data have also shown that TAVI is non-inferior to surgery in intermediate-risk patients.
European and American data showed a global increase in aortic valve replacement (AVR) related to an exponential rise in number of TAVI procedures and a stable / slow decrease in surgical aortic valve replacement (SAVR).
Over time, we observed a significant improvement in TAVI technology. TAVI procedures have been significantly simplified with low size arterial puncture, conscious sedation and shortened procedure. In the mean time the two main valve technologies have improved. Significant reduction in paravalvular leakage has been observed with newer generation of prosthesis, while pacemaker rates remains a meaningful drawback in comparison vs. SAVR.
As a next step in TAVI development, TAVI and surgery have been compared for patients with low risk for SAVR. Two large clinical randomized trials have been recently released and the purpose of this paper will be to discuss the results.


What are the guidelines
European Society of Cardiology guidelines have been updated in 2017. This document support two scores (Euroscore II and STS score) to assess the surgical risk of patients with severe aortic stenosis. The patients who should be considered for those procedures are the ones with symptomatic AS. The Heart team is central in the choice of AS intervention. TAVI is recommended in patients non suitable for SAVR and for those with high risk (STS or Euroscore II > 4%) or intermediate risk in case of transfemoral option (see table).

What are the two studies in low risk patients
The two pivotal randomized trials evaluating SAVR vs. TAVI are presented below. The first one is evaluating a self-expandable TAVI device (CoreValve, Medtronic): Transcatheter Aortic-Valve Replacement with a Self-Expanding Valve in Low-Risk Patients, Evolut Low risk trial.
The second one evaluates the balloon expanding valve (Sapiens 3, Edwards): Transcatheter Aortic-Valve Replacement with a Balloon-Expandable Valve in Low-Risk Patients; the PARTNER 3 study.


What is the methodology used
Those two trials have the same design: two arms, multicentric randomized controlled trials.
In both trials a 1-1 randomization between transfemoral TAVI with last generation prosthesis versus SAVR has been performed.
Inclusion criteria: severe aortic stenosis with low risk for SAVR. Low risk was defined by STS < 4% (for PARTNER3) or a 30 days risk < 3% (for Evolut low risk as assessed by a Heart Team). All patients with non-favourable anatomical features for TAVI (bicuspid valve...) have been excluded.
Endpoint:
PARTNER3:  Primary: all cause death, stroke, rehospitalisation at 12 months.
EVOLUT LOW RISK: Primary: all cause detah or disabling stroke at 24 months.
PARTNER 3:
1000 patients with severe AS were randomized to TAVI (503) and SAVR (497). The assigned procedure was performed in 496 TAVI and 454 SAVR patients.

Regarding the main characteristics of the population: No significant differences except for higher rates of NYHA III in the TAVI group (31.2% vs. 23.8%). Mean age was 73 years; 69.3% of patients were men, mean STS was 1.9% and mean Euroscore II 1.5. Of note 10% of patients had a right bundle branch and 27% suffered from coronary artery disease.

Regarding the main secondary endpoints: 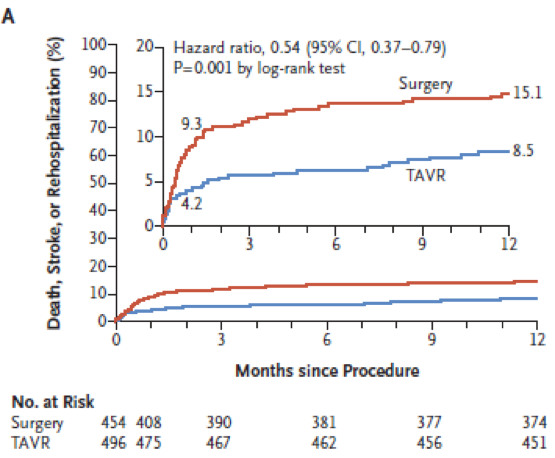 1468 patients underwent randomization (734 TAVI and 734 SAVR). The assigned procedure was performed in 725 TAVI and 678 SAVR patients.

Regarding the main characteristics of the population: no significant differences between the two groups. Mean age of 74 years, 65% male. The mean STS was 1.9.

The TAVI procedure was performed through the femoral access in 99% and under general anesthesia in 56.9% of patients. A BAV was performed in 34.9% of cases and post dilation in 31.3%.

The primary endpoint (all cause death and disabling stroke at 24months) occurred in 5.3% of TAVI and 6.7% of SAVR meeting the prespecified criterion for non-inferiority but failing to reach superiority. No significant impact of age (75 years cut-off), sex, BMI (<0 kg/m2 cut-off), STS (<% cut-off), LVEF (50% cut-off), coronary revascularisation, peripheral artery disease and diabetes was noticed.

Life threatening bleeding was observed in 3.2% of TAVI at one year versus 8.9% of SAVR.

Permanent pacemaker implantation was reported in 19.4% of TAVI versus 6.7% of SAVR.

Hospitalisation for heart failure was 3.2% in TAVI group versus 6.5% in surgical patients. 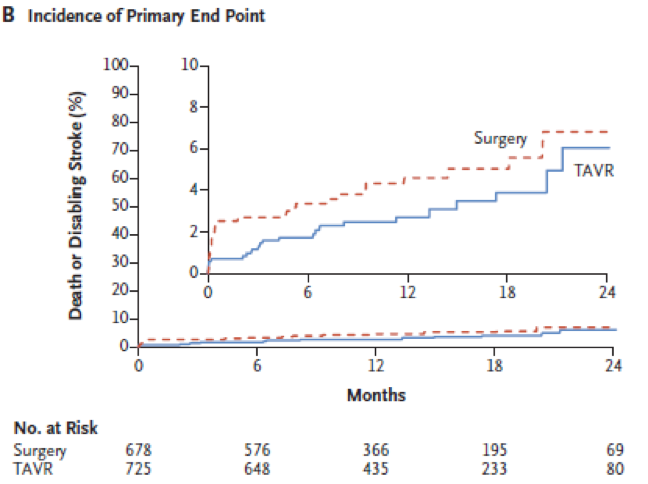 
How those studies change my practice
PARTNER 3 showed a clear superiority of balloon expandable TAVI vs. SAVR in low risk AS. This was driven mostly by a reduction of the composite of death, stroke and rehospitalisation. Moreover, TAVI is associated with shorter hospitalisation period, reduced rate of atrial fibrillation and lower rates of major bleeding complication. This is counterbalanced by a significant rise in the need for permanent pacemaker and higher incidence of mild paravalvular leak.

Those two last parameters remain important while we extend TAVI indications. It is worth to notice that considering low risk patient the mean age was 74 years. Therefore, when considering a patient with AS in heart team all parameters should be taken into account before choosing the more appropriate treatment. In young patients with high risk for pacemaker (right bundle branch for example) it is likely that SAVR could be favoured.

For other patients older than 75yo TAVI is the default strategy and when the anatomy is non favourable the heart team will consider SAVR.

The number of TAVI procedures has risen worldwide in recent years, and is expected to continue growing. Simplification of the procedure and improvement in the technic made of TAVI a valid alternative to SAVR. With PARTNER 3 and EVOLUT Low risk TAVI clearly showed its benefit in patient with mow risk for SAVR. The Heart team is central in decision making process, and should integrate all parameters to decide which therapeutic is the most appropriate.